AstraZeneca and the University of Oxford today announced an agreement for the global development and distribution of the University’s potential recombinant adenovirus vaccine aimed at preventing COVID-19 infection from SARS-CoV-2.

Pascal Soriot, Chief Executive Officer, AstraZeneca, said: “As COVID-19 continues its grip on the world, the need for a vaccine to defeat the virus is urgent. This collaboration brings together the University of Oxford’s world-class expertise in vaccinology and AstraZeneca’s global development, manufacturing and distribution capabilities. Our hope is that, by joining forces, we can accelerate the globalisation of a vaccine to combat the virus and protect people from the deadliest pandemic in a generation.”

The potential vaccine entered Phase I clinical trials last week to study safety and efficacy in healthy volunteers aged 18 to 55 years, across five trial centres in Southern England. Data from the Phase I trial could be available next month. Advancement to late-stage trials should take place by the middle of this year. Read full article. 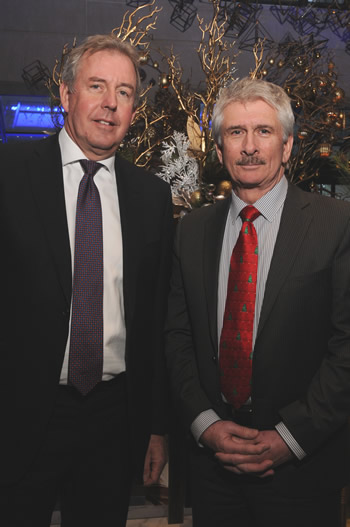 We are delighted to let you know that our good colleague and past BABA Chairman, Barry Eccleston was awarded the Order of the British Empire (OBE) by Her Majesty Queen Elizabeth II in the 2019 New Years Honour list, for his 'services to the United Kingdom aerospace and aviation industry'.

As so many know Barry was BABA's Chairman for three years from 2015 to 2018. At the same time he was Chief Executive Officer of Airbus Americas, a role he held for 13 years, as part of an exceptional career of nearly 50 years in the aviation and aerospace sectors.

As Chairman of BABA he gave willingly and tirelessly of his time and was an excellent and exemplary Chairman, as well as the strongest champion of UK-US relations.

We thoroughly and warmly congratulate Barry on this well deserved honor!